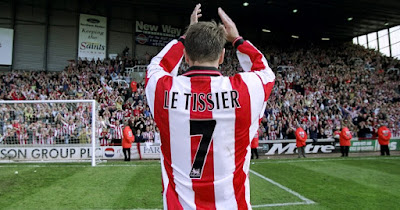 When it was announced that footballers would be wearing the name of a Marxist organisation on their shirts and 'taking the knee' before games many people sneered as such political statements could not surely interfere with sport to such a degree.  Then it actually happened.  Now it has become a sad and shameful ritual and not one person appears to have the guts to make a stand and defy the cult.  Of course to do so would signal the end of a career, but what happened to principles?

While no current player looks set to speak out, one former player has lined himself up for the chopping board.  Southampton legend Matt Le Tissier took to his Twitter account on Sunday to request that individuals from both the far right and far left should unfollow him.  It appears that Le Tissier had come in for some criticism over wearing a BLM badge on Sky Sports, as is now customary for presenters and pundits.  However, the following exchange suggests that Le Tissier is not too enamoured with being forced to wear it... 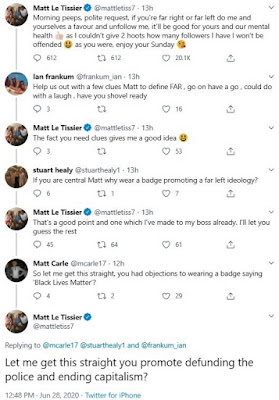 The last comment from Le Tissier removes any ambiguity - he knows the truth about BLM and he's not at all happy to be coerced into promoting the Marxists.  The left-wing pile-on was swift and predictably brutal.  They brought out all the standard insults - fascist, racist, gammon, thick, privileged white male and one user even accused the ex-pro of being "further right than Hitler".

He did also receive a lot of supportive comments.

Will Le Tiss survive the week in Sky Sports' employ?  Will anyone else challenge the BLM narrative?  We live in hope.
at June 29, 2020