While most eyes were on London and Bristol last weekend, the hard left were by no means confined to the south.  One of the likely flashpoints this coming weekend will be Glasgow, where leftists are aiming to topple the statue of Robert Peel.  The statue was targeted last weekend (see picture above) and a protest is planned on Sunday afternoon timed precisely one week after the Bristol mob toppled Edward Colston.

The Peel statue wasn't the only Glasgow target over the weekend.  Graffiti also appeared on the office of Tory MSPs Annie Wells and Adam Tomkins in Maryhill.  The ACAB (All Cops Are Bastards) acronym was daubed on the shutters as was "FUCK THE TORIES".  It's clear that these weren't merely SNP hooligans as there was no reference to independence or any of their usual slogans.  The people responsible are communist filth still smarting from the utter humiliation Corbyn suffered on December the 12th.  Those responsible will undoubtedly be at the Peel toppling protest this Sunday. 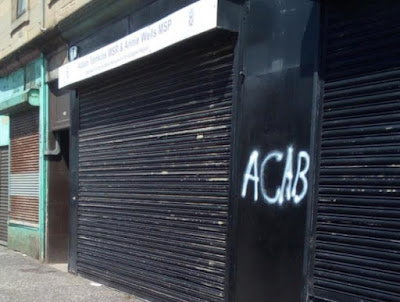 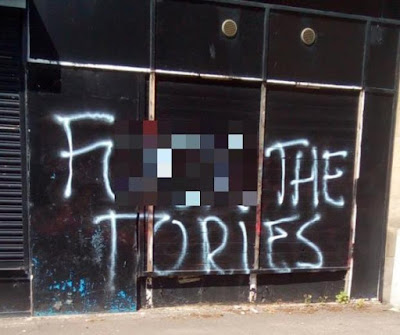 When the mob come for Robert Peel it will be very interesting to see if Police Scotland behave in the same cowardly way that Avon and Somerset Police did in Bristol, especially seeing as Peel is the founder of the police force as we know it.  As he didn't own any slaves, this is a direct attack on them and echoes the 'defund the police' movement currently sweeping America.

The hard left want police forces abolished across the Western world as the police stand in the way of the total chaos and anarchy the left need in order to rise to power.  It sounds over the top, but join the dots and it's very simplistic.  They don't actually care about black lives and the movement Black Lives Matter is just a bandwagon they have hijacked in order to destabilise and - they hope - destroy Western civilisation, replacing it with communism.  Oh, and by the way, once they are in control the police will be reinstated - once officers have been 'educated'.

Statues, more importantly our history, is another tool with which they are hoping to dismantle the Western nations.  It was George Orwell who wrote: "The most effective way to destroy people is to deny and obliterate their own understanding of their history".  A similar quote is attributed to the Slovak historian Milan Hübl: "The first step in liquidating a people is to erase its memory.  Destroy its books, its culture, its history.  Then have somebody write new books, manufacture a new culture, invent a new history.  Before long the nation will begin to forget what it is and what it was.  The world around it will forget even faster".  This is precisely what is happening now and make no mistake - if we allow this to happen on our watch then we are complicit in the genocide of the British nation.

If you want to see an up to date list of which statues the left are targeting, they have their own hit list here.  Note that the website was founded by the 'Stop Trump Coalition', whose own website features a montage of images including Remain protesters and Jeremy Corbyn.  Join the dots.
at June 11, 2020