Ash Sarkar has spent all morning on Twitter defending herself against the absurdly insensitive tweet she put out last night.  She has dedicated more than a dozen tweets to ridiculing the backlash, but has still not passed any comment - let alone condemnation - of the atrocity in Reading.  Is this just rampant narcissism or is it symptomatic of something more sinister? 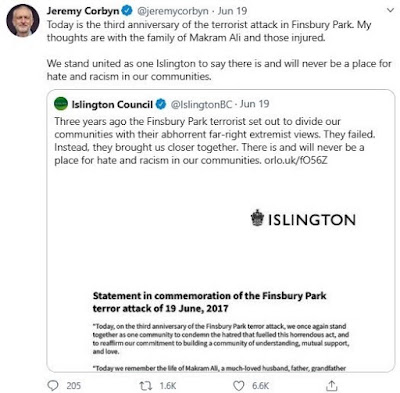 The lack of condemnation from the left in the current climate exposes their hypocrisy like never before.  They've been saying for weeks that 'black lives matter' and anyone who says 'all lives matter' is missing the point.  Now we see them for who they really are and what their slogan truly means - only black lives matter, but only those black lives that have been taken by white perpetrators.  You don't hear them speaking out about the much bigger problem of black-on-black violence.  They aren't speaking out about the 23 people who died in the George Floyd riots.  Who are the racists here?

Jeremy Corbyn finally tweeted at 14:40 on Sunday afternoon.  Note how he makes no reference to Reading having been a terror attack.  Contrast and compare with the above tweet from two days ago in which he very explicitly refers to the Finsbury Park terrorist attack.