We know from years of experience that the left has a huge blind spot when it comes to terrorism.  If the bombers are Ulster loyalists or white right-wingers then of course there is outrage.  However, there is often a failure or inability to even refer to terrorist attacks when they are carried by Islamists or Irish republicans.  The same can be said for child sexual exploitation.  While Labour's former deputy leader was happy to pursue elitist paedophiles (that didn't even exist), he and his colleagues have been almost exclusively silent about the national scandal of Muslim grooming gangs.  In fact such is the conspiracy of silence that the only frontbencher to speak out about the issue got sacked for doing so.

It will come as no surprise to many that the Labour leadership's response to the Islamist attack in Streatham yesterday followed this same pattern of denial.  Both Diane Abbott and Jeremy Corbyn could not bring themselves to call it terrorism, instead referring to it as an "incident". 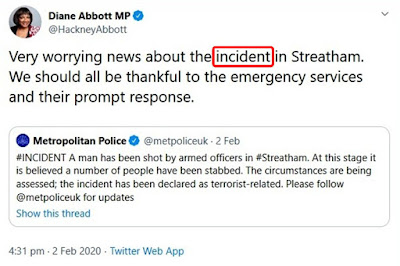 This wasn't merely a case of the facts not having yet been established.  As you can see from the Met's statement contained in Abbott's tweet - the incident has already been "declared as terrorist-related".  Corbyn tweets 93 minutes later, during which time it is even clearer what has happened.

This is almost an exact copy of previous responses to Islamist attacks and they use the same word - 'incident' - each time.

Now let's compare their response when Muslims are the targets and not the terrorists. 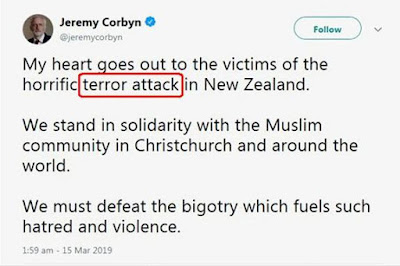 When Muslims are the victims of terrorist acts it is no longer merely an "incident", but a full blown "terror attack".  Gone is the appreciation for the emergency services, instead they are making political statements about solidarity, security reviews and bigotry.  Where is the solidarity and urgent security reviews when it's Muslim bigots doing the bombing, shooting and mass stabbings?
at February 03, 2020