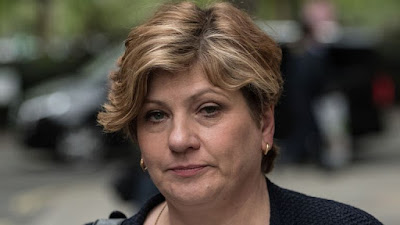 Nominations for the Labour leadership elections close at midnight and there's no sign of any last minute reprieve for Emily Thornberry.  She is currently the only candidate in both contests not to have proceeded to the ballot and time is almost out.  Several nominations have emerged on deadline day thus far, but none of which were for Lady Nugee.  She is stuck on 30 - three short of the target.

With little more than a dozen Constituency Labour Parties left to nominate - and under no obligation to do so - she is down and almost out.

It's all over.  No more nominations are forthcoming and she exits the contest two short of the 33 required.  A total of 641/647 CLPs registered a nomination.
at February 14, 2020