When Sinn Fein pulled off a shock result in the Irish elections recently it surely raised the spirits of hordes of Brit-hating leftists in the UK.  The Marxist party's success will have pleased the likes of Corbynistas, but will also have been relished by the separatists of Plaid Cymru and the SNP.  All these parties have two things in common - they're all left-wing and want to break apart the United Kingdom.  Therefore, success for one party weakens the Union and gives hope to the others - divided we fall.

When the SNP's Joanna Cherry appeared on BBC Question Time recently she was exceptionally smug about the success of Sinn Fein and happily predicted that Northern Ireland would break away before Scotland did.  Never mind the fact that Sinn Fein's armed wing murdered hundreds of Scottish descendants during the Troubles - people who made Ulster their home, but have been forsaken by the SNP and their fanatical drive for a socialist state.  We must not neglect to mention the sacrifice of Scottish members of the British Army either.  Again, their spilt blood on the streets of Northern Ireland is meaningless to the fake nationalists of the SNP.

A couple of days ago a poll was released that somewhat undermined Joanna Cherry's cocky prediction.  The detailed poll appeared in the Belfast Telegraph, with the headline grabber that just 29 per cent of those asked would support the secession of Northern Ireland.  This compared to a whopping 52 per cent that backed the status quo. 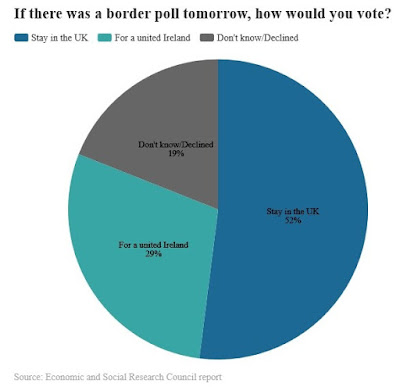 This was not an isolated response either.  Of the last ten polls conducted on the issue, only two returned a separatist majority and it was a negligible lead - one per cent (Sept 2019) and three per cent (December 2017).  The other polls returned a majority for the UK ranging from three per cent (May 2018) to 33 per cent (June 2018).

Regardless of opinion polls, Joanna Cherry's confidence in Sinn Fein to deliver a united Ireland is misplaced.  Even if Sinn Fein manage to form a coalition government, it will be in Dublin - not Belfast.  The Irish Republic has no jurisdiction in the affairs of the United Kingdom, let alone the power to force a border poll.  Sorry Joanna, but Northern Ireland is not going anywhere.