Labour MP Nadia Whittome was embroiled in a public spat with a Labour member on Twitter last night.  Paul Embery, a columnist with Unherd, took exception to Whittome's stance on the trans issue currently wreaking havoc in the party.  Whittome is backing the controversial trans pledge sheet and has tweeted that the party should "educate those who are ignorant... and if they don't respond to education, they should be expelled".  Embery quite rightly pointed out the communistic undertones in her tweet, but also struck out at the MP's relative youth (she is 23, the youngest MP in Parliament).  Whittome retweeted his remarks with an ageist dig of her own. 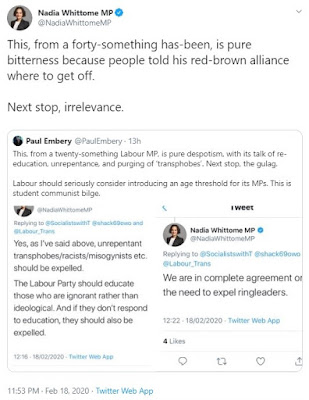 Embery describes himself as 'blue Labour' and was a senior trades union officer until recently.  After speaking at a pro-Brexit rally last year he was expelled by the Fire Brigades Union (see video, below).  Not sure what Whittome is referring to when she says his 'red-brown alliance' was rejected, but what we do know is that Corbyn's red-red ideals were decisively rejected on December the 12th.  The Nottingham East MP initially backed hard left Clive Lewis for the leadership.  When he was eliminated, she backed Emily Thornberry.  Oh dear.  Talk about irrelevance?