There was a minor kerfuffle in the corridors of Westminster yesterday as a four-legged intruder somehow managed to infiltrate the building.  Labour MP Karl Turner tweeted a picture of the prowler with a 'witty' quip. 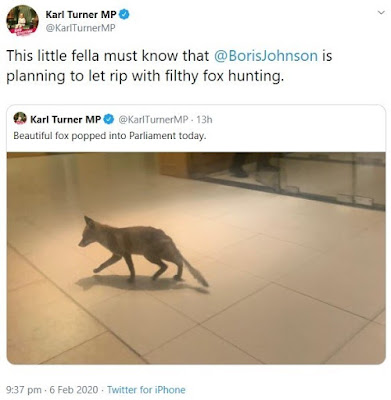 Karl's tweet backfired somewhat when it became known that foxy chose to leave a filthy gift outside someone's office.  However, it wasn't quite Boris Johnson or even a Tory MP that received a number two outside their door - it was Labour MP Kerry McCarthy.  An even bigger irony is that McCarthy is a fierce opponent of fox hunting and the former vice chair of the League Against Cruel Sports.  She tweeted a picture of foxy's gift, but it's far too graphic to show here.