LEFT LOSE IT OVER TEABAGS

The unbridled hatred of leftist keyboard warriors found a new target recently following an innocuous tweet from the new Chancellor of the Exchequer.  On Friday Rishi Sunak posted a picture of himself on Twitter posing with a large bag of Yorkshire Tea.  There's nothing particularly out of the ordinary about this as Sunak represents the Yorkshire constituency of Richmond.  There was no suggestion that Yorkshire Tea were sponsoring Sunak or the Conservatives, or that the company had any prior knowledge whatsoever - in fact it didn't.  However, none of this could deter the reactionary headcases of the left and social media outrage ensued, ironically just a week after many of the same culprits were using the hashtag #BeKind in response to the suicide of Caroline Flack. 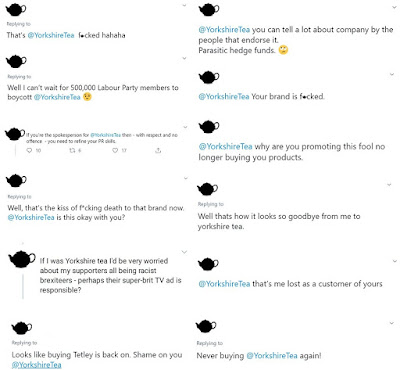 Such was the leftist outrage that Yorkshire Tea responded publicly several times over the weekend and yesterday noted that Rishi Sunak was not the first politician to pose with their brand.  Jeremy Corbyn had done so in 2017. 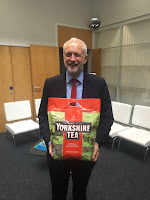 Presumably there was no outrage when magic grandpa posed with the brew?  Funny that.
at February 25, 2020