STARMER IN THE FIRST ROUND? 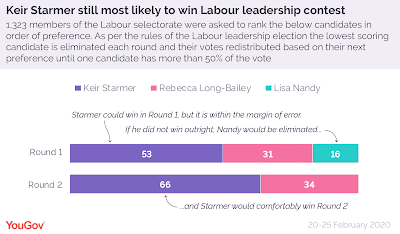 Starmer has significantly extended his lead in each of the three YouGov polls to date, but the only other poll carried out suggested a narrow victory for Rebecca Long-Bailey.  The Survation poll, carried out last month, took its findings from a much larger sample than YouGov.  It found that Long-Bailey would have a very slender advantage in the final round.  Survation are not mugs, they correctly predicted a Leave vote in 2016 when most pollsters (including YouGov) had Remain winning.  They also correctly predicted the Scottish independence referendum and all three of the last general elections.

This is how all four leadership polls stack up.

Note:  There would not be a run-off if Starmer received more than 50% in the first round, but as 53% is within the margin of error YouGov has included second preference findings