Labour's wordplay in downplaying Islamist terror while amplifying the menace of the 'far right' is something that has become more and more prevalent in recent years.  The 2017 and 2019 elections allowed Corbyn's commie clique to increasingly populate the opposition benches with Muslim and leftist MPs who were more concerned with Palestine and race baiting than Brexit and grass roots politics.  These MPs take their lead from people who have been making excuses for and tacitly supporting anti-British terrorists and terror groups for decades - namely Corbyn, McDonnell and Abbott.  Therefore, when Muslims attack it's... 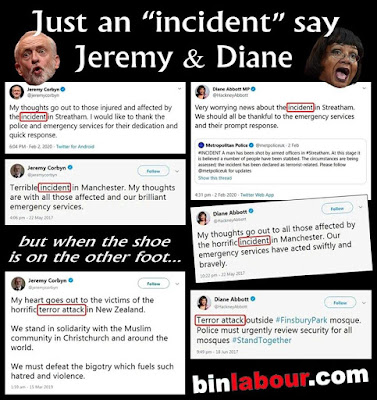