WHY HIDE THIS DAVE?

Like many MPs, Dave Lammy is not quite satisfied with earning an £80,000 salary, lavish expenses and, in his case, the occasional slot on LBC Radio.  He's now promoting a book too.  When Tribes hits the shelves it will cost a whopping £20, but it's not his first effort.  In 2011 he was quick to cash in on his favourite subject when he wrote Out of the Ashes, a book about the London riots that occurred less than three months earlier.  Race is also the topic of his latest book, quelle surprise!

Lammy is also renowned for his expenses claims, among the highest in Parliament.  Ironically the same year he wrote Out of the Ashes he defended his expenses by claiming that his workload was so heavy that he had no choice but to run two offices.  That year his expenses were the highest of all 650 MPs, but despite his supposed dedication to casework he still found time to write a 320 page book in less than three months.

Lammy didn't top the MPs' expenses table again after 2011, but his claims have remained consistently high.  Since 2011 he has tabled claims worth a staggering £1,203,052.  Yes, you read that correctly - £1.2 million.  It comes as no great surprise to find that he's keen to avoid as much attention as possible when it comes to his expenses. 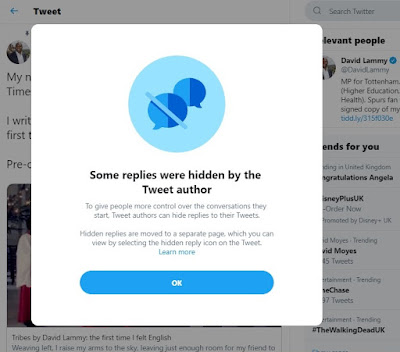 This was the message that pops up to Twitter users when clicking on one of his promotional tweets for his latest book.  Unfortunately for Dave, users can still explore the hidden tweets and the message only serves to draw more attention to them.  One such hidden gem refers to his excessive expense claims, duly noted by one user who screencapped it and retweeted it (see below).  Lammy then hid the retweet too! 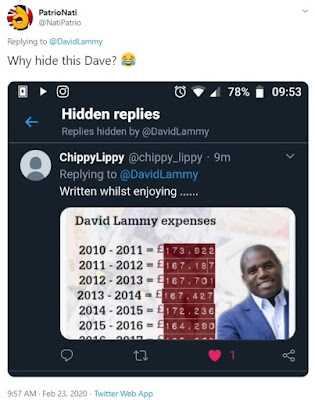 What do we learn from this concealing act?  That Dave is genuinely ashamed of his lavish expenses, but it's impossible for him to run from them.
at February 25, 2020