TRANS FOR UNDER FIVES

Newham Council in London goes to more lengths than most to celebrate 'LGBT History Month'.  The rainbow flag can be seen all over the borough, flown from council buildings and even the zebra crossings are repainted in its colours.  Loads of free LGBT events are laid on for the public, including a series known as 'Drag Queen Story Time'.  Nothing wrong with that you might say, except that Drag Queen Story Time is presented to children under the age of five. 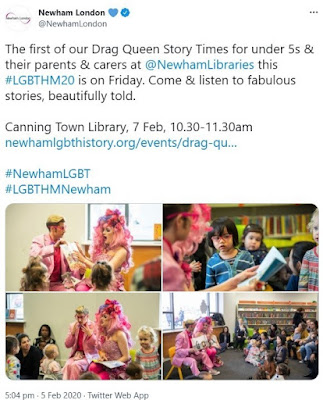 Is this appropriate?  On Newham Council's dedicated LGBT website the event is justified thus:  "By providing spaces in which kids are able to see people who defy rigid gender restrictions, Drag Queen Story Time allows children to imagine the world in which people can present as they wish".  There is nothing innocent about this story time, it's trans indoctrination of little children when they are at their most vulnerable and impressionable.

Newham Council is under complete control of the Labour party.  Since 2010 the party has won every single council seat - all 60 of them.  Labour-controlled Lambeth Council has also laid on a similar event.
at February 15, 2020