While John Bercow's friends in the Westminster bubble continue to shrink away and bite their tongues, only a blind loyalist or an idiot would come forward and defend him right now.  Step forward the Shadow Home Secretary... 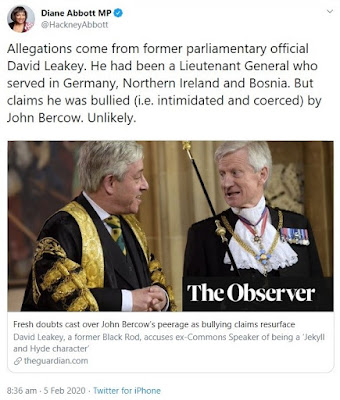 "Bad take", "ill judged" and "poor taste" were just some of the many comments in response to Diane's tweet, all comments that could have been levelled at her party leader for his outlandish and offensive nomination of Bercow for a peerage.  Having just been thumped in the old Labour heartlands - territory that also forms the Brexit heartlands - how best to further humiliate your traditional voting bloc by endorsing a man who did all he could to undo the Leave mandate?  What's more Corbyn's trivial motive in doing so was merely to spite the victorious Conservatives.

The advent of all the bullying allegations has proved a huge backfire for Corbyn and is undermining his decision.  Diane Abbott probably had her leader in mind when she tweeted this morning, rather than any thought for Bercow himself.  However, her clumsy attempt to intervene has rightly opened a can of worms for herself.  As she states in the tweet, the latest claims have been made by a former very senior military officer with a distinguished career behind him.  She is not just questioning David Leakey's honour, she is questioning his honesty.  Very poor indeed considering the angry shouty little man on the other end of his allegations has very little to be proud of by comparison.
at February 05, 2020