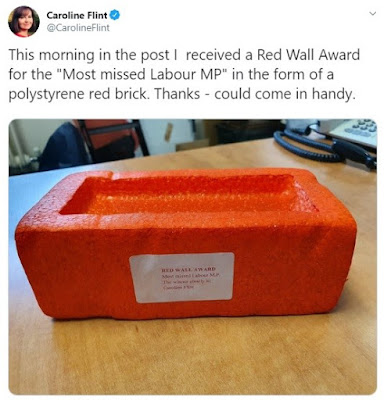 This was a lovely gesture and we wholeheartedly agree with the sentiment.  While Caroline backed Remain in 2016, she stood by the result and persistently backed Brexit during last year's Parliamentary shenanigans.  Unfortunately, while many of her Brexit-blocking colleagues survived the Tory onslaught, she paid the price for the sins of her party.  Her 5,000 vote majority in Don Valley was wiped out and for the first time in its 101 year history the seat turned blue.  Flint blamed her defeat on "Corbynistas and uber Remainers".  The hard left had sought to petition for her de-selection prior to the election, but her status as a long-standing popular MP sent them packing.

Flint was probably the one Labour MP who stood on December 12th that we would have been happy to see returned to Parliament.  While some Labour MPs sluggishly moved to halfheartedly back Brexit in the occasional vote (Onn, Smeeth, Champion etc), Flint was consistent.  They did so out of self-interest, sensing the punishment that was coming from their Leave-voting constituents.  Flint was genuine about her commitment to Brexit and only yesterday she criticised Tony Blair for ignoring it during his big headline grabbing speech:  "Dying in a ditch over Remain was not the centre-ground of British politics" she scoffed.

Her cryptic message at the end of her red brick tweet could be taken as a suggestion that she could return one day.  There's little chance of that happening next time round if Long-Bailey wins the leadership, but with Starmer (or Nandy) at the helm another punt at Don Valley is a good shout.  Now that Brexit is finally getting done there's a question mark over what will happen to those crucial 6,000 Don Valley Brexit Party voters, particularly seeing as they were overwhelmingly former Labour voters...