It was a 'great turnout' announced Richard Burgon, but the truth is that the 'Rally For Socialism' couldn't even fill a small venue.  Last night around 150 people heard speeches from Corbyn loyalists such as John McDonnell and Diane Abbott, but there were empty spaces at the back and in the balcony, while unused seats could be seen stacked up at the side.  The rally was organised in response to the hard left's struggling leadership campaign that has seen Keir Starmer and Angela Rayner become run away favourites.  Leaflets for the two continuity Corbyn candidates were handed out, but this was a loyalist crowd who were already voting for Long-Bailey and Burgon anyway.  The event was such a blowout that Richard Burgon was the only main speaker who mentioned it on Twitter. 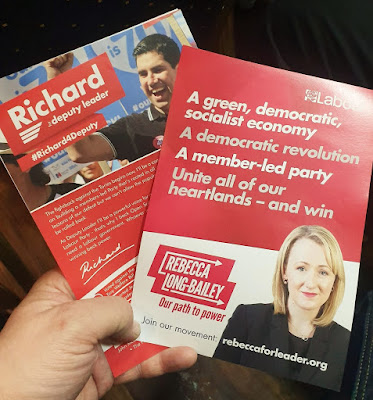 In last year's European elections the Labour party portrayed UKIP and the Brexit Party as 'far right' and 'fascists'.  It was a daft tactic that ultimately backfired, but the sad truth for these lefties is that Brexit Party meetings draw far bigger crowds than this.

The main speakers at last night's rally were: