The beast that screamed 'NAZI SCUM' over and over again in the face of a middle-aged man has been forced to cancel a contract with the NHS.  35-year-old Siobhan Charlotte Prigent laughed as the man was doused in milkshake and then physically assaulted by the leftist mob.

Today it was confirmed that the thug no longer works at University College London Hospital (UCLH), a role she had apparently only held for a week.  Following national outrage over her disgusting behaviour the NHS released the following statement.

"Siobhan Prigent is not a UCLH employee.  She has been working for a third party contracted to carry out administrative work at UCLH.  Her work here has not involved patient contact and is not funded by the NHS.  Ms Prigent has today informed us that she will no longer be working at UCLH because she does not want us or the NHS to suffer any more negative attention.  She had been at UCLH for a week.  As an NHS trust, we pride ourselves on treating our patients and colleagues with kindness and compassion in all that we do".
NHS spokesperson

Prigent runs a Manchester-based management consultancy called VLEK Ltd, itself a fairly new venture as it was only registered with Companies House in September last year.  The loss of the NHS contract was not the first downside for Siobhan.  As soon as she realised her outburst was all over the internet she hurriedly withdrew from social media and went to ground, mirroring other recent examples of debased leftist behaviour...

Funny thing is though, none of these people had much in the way of privacy settings on their accounts, so their profiles, posts and pictures were there for all to see.  Siobhan listed herself under the following description "#LBGTQIA #intersectionalFeminist #BodyPositive #MentalHealthAwarness Trying to educate myself".  She certainly needs to educate herself on social media awareness.  Some newspapers went as far as to post pictures from her Facebook account, including this one with smug leftist actor Benedict Cumbertwat.


Prigent's appearance in the photo is worlds away from the hate-filled creature in this week's video.  Perhaps it was taken before the third wave feminist/leftist rot set in?  This is a more recent pic (WARNING: Do not click on it because it will expand and fill your screen and it's terrifying). 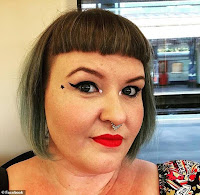 We've made Siobhan the 'star' of our latest YouTube video, along with her hero Jezza.  The use of a certain punk classic is meant in the most sarcastic sense possible.  Watch below.

Furthermore, if anyone reading this article knows the identity of the man pictured below please post in the comments.  He is the steward in the Unite (the union) baseball cap who assaulted the elderly man at the same event. 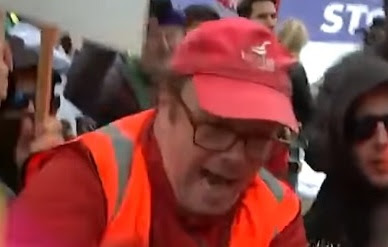