PIGS AT THE TROUGH: JACQUI SMITH 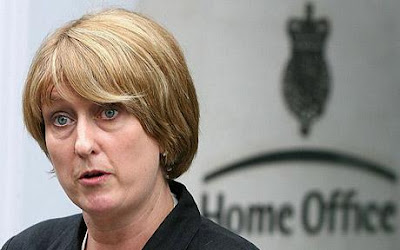 Jacqui Smith was a member of the Labour government for almost ten years and rose to the position of Home Secretary under Gordon Brown.  Before entering Parliament she was a schoolteacher, as were her parents before her.  She was selected for the newly created seat of Redditch via an all-woman shortlist and won it in the Labour landslide of 1997.

Smith's involvement in the expenses scandal first came to light in February 2009.  She was accused of 'flipping' her primary home designation in order to maximise allowances for her second home.  At that time MPs were allowed to claim for a second home, so they could perform their duties both in Westminster and their constituency.  Smith's decision to name her sister's house as her 'main home' allowed her to claim a whopping £116,000 towards her 'second home' back in Redditch.  The designation directly contradicted her own website which stated that the MP "lived in Redditch".

The controversy came to light when her neighbours told journalists that she only spent 2-3 nights at the London property each week.  Smith denied these claims and said that she had done nothing wrong.  The following month it was revealed that among the expenses claimed for her Redditch home were two adult films.  These were among five pay-per-view films that had been claimed for, despite the fact she was in London at that time.  This time Smith apologised, as did her husband, who said sorry for 'embarrassing his wife'.  She said the claim was a 'mistake' and agreed to pay it back, but that she had no intention of resigning.  The Sunday Sport responded to the latest revelations by sending a glamour model around to the property with a stash of porno mags and DVDs as a 'donation' for Smith's husband.

In relation to her 'second home' Smith claimed for everything from a £1,000 fireplace and a £550 kitchen sink to an 88p bathplug.

Despite the embarrassment, Smith was defended by Gordon Brown at the time.  However, less than three months later it was announced that she would be leaving the Cabinet and returning to the back benches.  That was where she remained until 2010 when she lost her seat to the Conservatives.  The expenses scandal may well have contributed to the result.  Seven months before the election she was found to be in breach of the rules on second home allowances.  The Parliamentary Standards Commissioner accepted her defence that she had spent more time in London, but decided that this should still have been regarded as her second home and not Redditch as she had designated.

She was not asked to repay any money, but ordered to make an apology to the House of Commons.  When Smith made her 'apology' she only said sorry for the pay-per-view expenses and went on to proclaim herself innocent of home flipping.

Smith later claimed that she was unfairly targeted during the expenses scandal because she was "a woman" and that she became the "poster girl" for the scandal.  She maintains that she did nothing wrong in the designation of her homes.
at June 11, 2019