The first attempt by Remainer MPs to stop Brexit from happening in October failed this evening.  The motion, supported by Labour, the SNP, Lib Dems, Plaid and Green MP Caroline Lucas, was defeated by 11 votes. 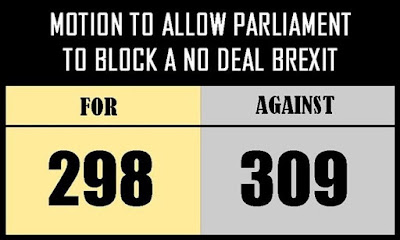 As the Tories cheered the result an angry Corbyn shouted across the chamber "You won't be cheering in September".  Quite what he meant by that is anyone's guess.  Perhaps he meant to say October, that would have made more sense.

Eight Labour MPs voted against the motion, crucially 17 abstained.  Several opponents of a second referendum were among the abstentions including Ruth Smeeth, Melanie Onn and Gareth Snell.  However, despite all her recent bluster, Lisa Nandy supported the motion.  Note to people of Wigan - remember this.

Ian Blackford was furious about Labour's rebels and abstentions, directly blaming them for the motion's defeat in a furious tweet.  "Unforgivable" he chuntered.  Thankfully all ten DUP members were present and duly voted against the motion.

The eight Labour rebels who opposed Labour's motion were:

On the Tory benches there were ten rebels that supported Labour's motion.  All but three represent Leave-voting constituencies:

Make no mistake, this won't be their last attempt to stop us leaving in October.  They will be back again soon with more of the same and the Speaker will be only too happy to oblige them...
at June 12, 2019