ELEPHANT IN THE ROOM

The left-wing press were clearly over the moon with the Peterborough result, but the quality of the coverage differed per rag.  The Mirror couldn't hide its delight, dedicating an entire article to ridiculing Nigel Farage, while the Guardian had a more measured approach.

The Guardian article is significant because although it addresses several key factors in Labour's victory it fails to address the most glaring issue - the elephant in the room.  Yes, we know all about how Labour is a well-oiled electioneering machine, they've been at it for the best part of a century whereas the Brexit Party were at it for a few weeks.  Yes, we know all about the postal votes and how the overwhelming majority of postal votes always appear to have the Labour box ticked.  There were reportedly 6,000 postal votes in this by-election, that's almost as many votes as the Tories could muster in total.  It's a solid tactic, routinely deployed in Labour towns and cities up and down the country.  We know that.

But why does the Guardian not mention the 'M' word once in its article?  We said before this election that this ten per cent Peterborough demographic would be vital for Labour to succeed.  The Great Leader knew this only too well and exploited it to ultimate success.  The Guardian may not have mentioned it, but perhaps they didn't need to.  This was the picture they lead with... 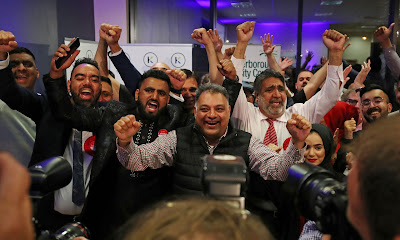 The elephant in question usually has a beard, slaps his woman around a bit and prays five times a day.
at June 07, 2019