The Independent made a huge balls-up yesterday with the following tweet (now deleted).  See if you spot it... 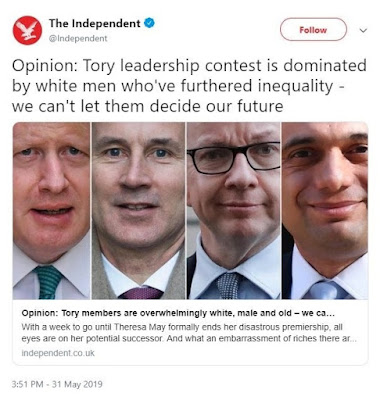 One of the 'white men' featured spotted it...


The race-baiting article attached to the Independent tweet is based on some bizarre notion that the Tory leadership race is dominated by white males.  Any wanky liberal reading the article could hardly fail to agree seeing as it conveniently fails to mention Andrea Leadsom, James Cleverly or Sajid Javid (despite his picture being in the disastrous tweet).  There is a brief mention of Esther McVey, but the bulk of the article is dedicated to painting Gove, Johnson, Hunt and Raab as racists.  Oh, the irony.  The title for this disgusting piece of work is more or less:  "Mature white males can't be allowed to govern our country".  We've got news for you Jenna Norman - that discounts both Jeremy Corbyn and Vince Cable - for starters!

How is this acceptable?  Imagine for one second she was arguing against a black leadership candidate, purely because he/she were black?

It's hard to know which it is that this anti-white feminist finds more offensive - the ethnicity, age or gender of those contesting the Tory leadership, but one thing is for sure - this Tory leadership contest is actually the most diverse leadership battle there has ever been in any of the major parties.  James Cleverly, Sajid Javid, Andrea Leadsom and Esther McVey have seen to that.