26 Labour MPs wrote to Corbyn today imploring him not to back a second referendum.  The letter (see below, click to enlarge) warns of the potential threat to Labour in Leave-voting seats, primarily from the Brexit Party.  The MPs explicitly state that "Brexit must happen.  The UK must leave..." 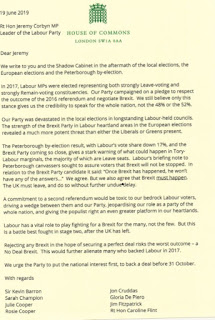 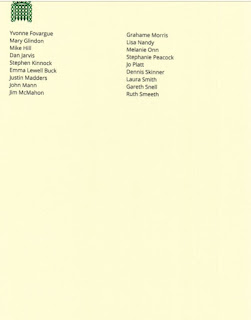 There are only two Brexiteers among the signatures (Mann, Skinner), the overwhelming majority being Remainers who are trying desperately to save their own Parliamentary skins.  How else to explain the presence of Stephen Kinnock, a man whose family made millions from being at the heart of the EU beast?  Having just seen the Brexit Party come from nowhere to almost snatch Peterborough, Stevie is clearly worried that the Brexit heartlands in south Wales are under threat from this new phenomenon.  Furthermore, he hasn't got thousands of Muslim postal votes to back him up either.

The only MP representing a Remain seat on the list is Jim Fitzpatrick, an MP who backed May's deal at the third time of asking.  Dan 'Two Jobs' Jarvis is also on the list, surely the gravy train robber is not looking to stand again at the next election?  Nothing would surprise in the shameless world of Westminster.

This is the full list of signatories, complete with their constituency referendum votes.