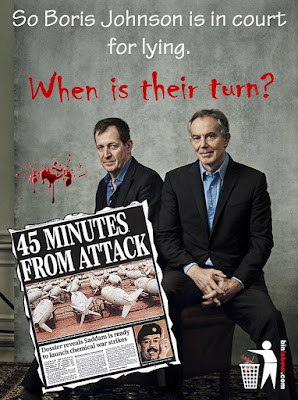 A BTLP original in response to the Remain-orchestrated prosecution of Boris Johnson, this became the most shared meme from our Facebook page since February, shared 21,007 times.  It's been a while since we targeted Blair and his illegal war and it's fair to say we don't do it often enough considering the death, destruction and ongoing chaos in the Middle East arising from it - not to mention the loss of British life.

The inclusion of Campbell in this meme topped off a perfect storm and, as one of our followers pointed out - when will it be the turn of all the Remainers who promised to 'respect the referendum result' and have spent three years trying to overturn it?
at June 02, 2019