Thankfully the so-called 'blimp battle' has been called off this time around.  The creator of the Sadiq Khan 'blimp' has called off its 'flight' in respect to our war dead.


"Few people asking me about the Sadiq blimp.  I was never going to fly it during our 75th D-day anniversary week, it's a complete disrespect to this country and to the heroes who laid down their lives for us.  Sadiq talks about 'Britishness' - yet he champions protests against our oldest ally, allows Trump baby balloon to fly during a state visit (on D-Day commemorative week!) and he's turned London into a global cesspit and laughing stock".
Yanny Bruere

Very classy and respectful.  No comparison with this freak show... 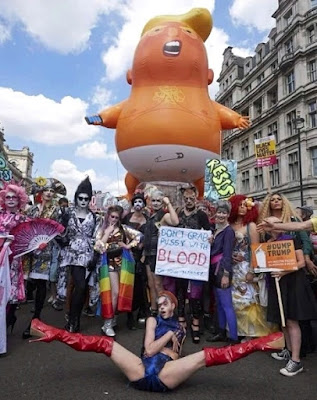