ACID IS NO JOKE

Jo Brand's remark about battery acid being thrown at "certain unpleasant" politicians has created a lot of chatter on social media, but strangely not a single media outlet appears to have carried the story (at time of writing).  It doesn't take a genius to know exactly who Labour supporter Jo is referring to.  The only people being milkshaked are Brexiteers.  Imagine if the 'joke' was on the reverse side and a right-wing comic had suggested replacing milkshake with acid and throwing it over Corbyn and co? 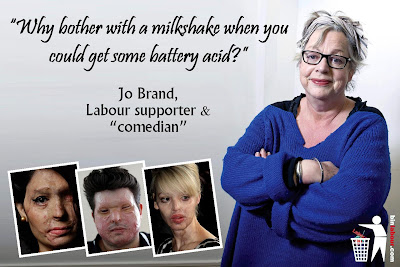 Of course comedy is subjective and one look at our Facebook page will tell you that we all share a sense of humour, but this is beyond the pale.  Acid attacks are one of the most horrific and sadistic ways in which someone can be physically assaulted.  Victims are scarred for life in the most prominent part of their bodies - their face - and they are reminded of it every time they look in the mirror or see a photo of themselves for the rest of their lives.

It's just not funny Jo.

Will the BBC act?  Danny Baker was fired for much less than this.  Will there be any consistency?  Don't hold your breath, but it's another good reason to sign the TV licence petition.

A petition dedicated to Jo's dismissal has sprung up already!
at June 12, 2019