A few months ago we posted the following meme on our Facebook page following International Women's Day. 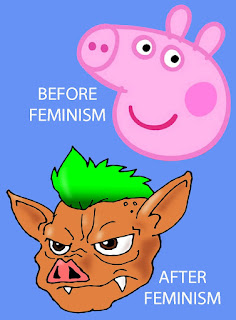 It was badly worded and we copped some flak.  Although it was posted in a photo album titled "Modern Feminism" some people didn't get it and assumed it was an all encompassing attack on feminism dating back to the suffragettes.  Nonsense.  It was a statement on what feminism has become - virulently left-wing, spiteful, misandrist and politicised to the point where rape of women is acceptable as long as it's not privileged white males doing the raping.  Apologies if we didn't make that clear at the time, so perhaps this is what it should have looked like... 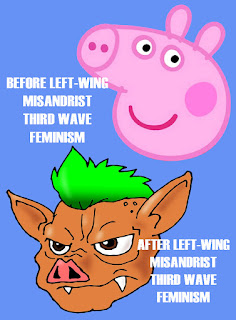 On second thoughts, no apologies.  If you haven't clocked it by now you're lost.  You want an example of how politically extreme 21st century feminism has become watch how they flounder when confronted by a simple question - feminism or Islam?  The two, as any right-minded world-weary individual will know, are about as compatible as Jeremy Corbyn and an ex-servicemen's club.

What is the point of a feminist in the 21st century if not to address the inequalities still suffered by women in the world today?  Yet when they are confronted by female genital mutilation, the niqab or Muslim grooming gangs they run a mile.  And then some.

One more example of how the left has hijacked feminism was laid bare in a discussion on Good Morning Britain yesterday.  The ever-wonderful Kate Andrews was pitted against a 'feminist' called Natasha Devon who railed against the 'right-wing' and near the end of the debate stated that "human beings are not meant to exist as individuals".  That's communism, right there.  Gotcha.

For some reason Google doesn't want us to share the video, but hopefully you can see it by clicking here.  If you manage to see the video you may also note the similarities between our meme and the two participants.  We've added a screencap below to highlight exactly what we mean by ugly 21st century hateful (almost testosterone-driven) third-wave leftist feminism. 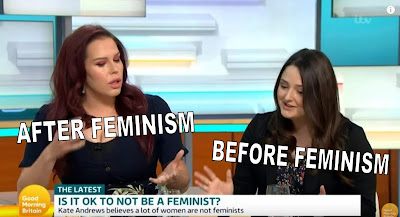 We already have equality in the West.  Go and spread your message throughout Saudi Arabia.
at June 01, 2019