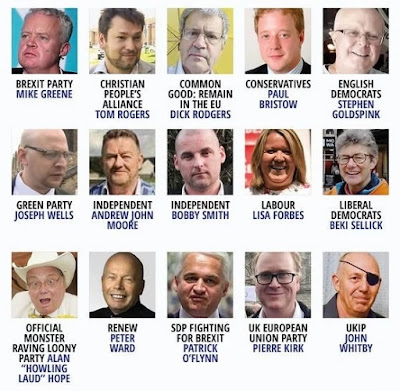 Of the fifteen candidates standing in today's by-election there are six Brexiteers, six Remainers and three undeclared/neutral candidates.  In the 2016 referendum the constituency returned a 61% Leave vote.  In the last Parliamentary election there were just four candidates and, as we know, the seat was won by Labour's Fiona Onasanya.


The Brexit Party hammered Labour in the Euro elections, but it's important to note that the council boundaries are not the same as the Parliamentary boundaries, so this result is not as indicative as it might seem, plus voters do not necessarily vote the same way in Parliamentary elections.

Here's a full run-down on the by-election candidates, starting with the bookies favourite.