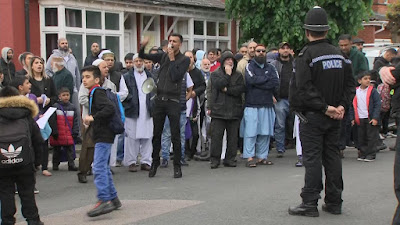 The Birmingham school protests have paralysed the Labour party.  Many leading figures have been unwilling and unable to address what is essentially a clash between their position as a liberal pro-LGBT party and a Muslim party.  Clearly the two ideals are incompatible and this has given local MPs and councillors a headache.  If they back one side they upset the other.

Ladywood MP Shabana Mahmood backed the Muslim protesters, but as a Muslim herself the outrage was largely muted within the party.  Now another local MP has expressed his support for the protesters, but the response this time has been slightly more vocal.  Why?  Because Roger Godsiff (Birmingham Hall Green) is an old white geezer.  How dare he?

Roger addressed a meeting this week in which he voiced his unwavering support for the protesters.  The meeting is chaired by the protest leader - the same young man that Jess Phillips (Birmingham Yardley) faced off with last month.  It should be noted that this chap, Shakeel Afsar, doesn't even have any children attending this school - further proof of the Islamist nature of the protest.  There are also reports that some of the protesters have been bussed in from outside Birmingham.

Several videos have emerged from Godsiff's little gathering, having been uploaded by those in attendance.  In the video below Afsar thanks Godsiff for attending the meeting and then the MP embarks on a speech.


Note that Godsiff refers to a local councillor who "has no children", while stood next to the protest leader who has no children!  The conclusion to his speech can be seen below, after which he shakes hands with Afsar again.

The Birmingham Mail reports that several Labour figures have called for Godsiff "to quit", albeit they're only able to quote two of any significance - Ilford North MP Wes Streeting and a Birmingham councillor John O'Shea.  It appears that Labour is never going to get off the fence about this issue - it's Brexit all over again!
at June 08, 2019