The Beeb's decision to abolish free TV licences for the over 75s has sparked a shit storm.  It's been a long time coming.  In the age of Netflix, YouTube and countless other entertainment avenues, people of all ages are beginning to ask why they are required to pay for the privilege of a handful of BBC channels they rarely, if ever, watch.  What's more, unless you're a leftie, liberal and/or remoaner, why on earth would you want to pay for a media outlet that aims to indoctrinate its viewers with politically correct anti-British anti-Brexit bias?  If you don't like the political stance of a certain newspaper, you wouldn't buy it would you?

The Beeb's latest bare-faced cheek comes just a matter of days after the D-Day commemorations, where we remembered the sacrifices of many thousands of young Brits on the beaches of Normandy.  Now the surviving veterans of that battle, and the many that followed, are being asked to stump up even more cash to fund the likes of Gary 'Revoke Article 50' Lineker and Graham 'Let's Take The Piss Out Of Trump & The Tories' Norton.  That jug-eared numpty picked up almost £2million last year alone.

If you're angry about this issue, or just angry about this hideous tax and the BBC in general, please sign the petition.  It's been up and running for months, but the furore unleashed in the last 24 hours has sent the numbers spiralling upwards and it will now be considered for Parliamentary debate.  Keep up the pressure and join the boycott! 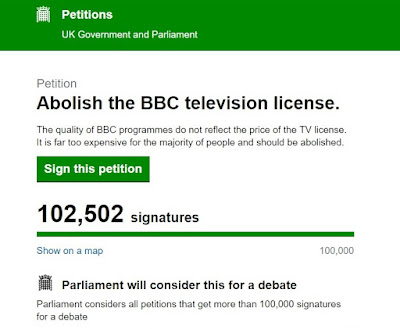