It's taken 48 hours for Labour to back down and return Chris Williamson to the wilderness.  A statement was released exonerating Jeremy Corbyn from any role in the decision, making it known that the ruling National Executive Committee was behind it.  Keith Vaz, who sat on the disciplinary panel two days ago, reportedly changed his mind about the decision to readmit Williamson.

Following the huge outcry from Labour MPs it appears that the party has used Vaz's u-turn as a means to reinstate the suspension.  What a pantomime!

Spare a thought for the loon at the centre of this controversy.  He's only tweeted twice in the last two days - firstly in the early hours (celebrating, perhaps?) following his readmission and again after his re-suspension.  Bless. 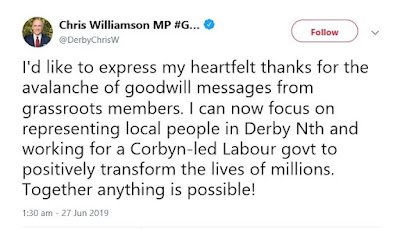 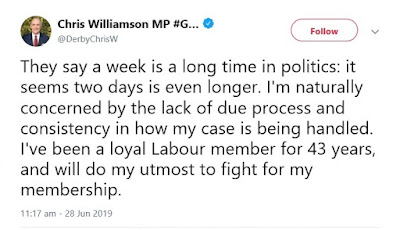