UNCERTAIN TIMES FOR ALL PARTIES

"Labour’s hopes of securing the sizeable majority it needs to enact a transformative agenda are uncertain".  So wrote Little Owen in his Guardian column yesterday.  True, we live in uncertain times, and just when it looked almost certain that a Labour/SNP coalition government would be our fate, Theresa May resigns and a new party arrives with a juggernaut of momentum and purpose.  Not only that, but Labour now haemorrhages voters to hard Remain parties, most notably the Lib Dems - a party almost fatally wounded not so long back, but now back with a Remain vengeance.

Of course we shouldn't read too much into the European election results (or the council elections before them) where Westminster is concerned.  Despite the most recent YouGov poll showing the Lib Dems out in front, Brexit Party second and the Brexit betrayal parties in joint third, rarely do such results transfer into a general election.  It's vital to remember that although UKIP won the 2014 European elections, the following year they won just one seat in the general election.  People tell opinion pollsters one thing in the light of the most recent headline grabbing election, but when it comes to the actual event most revert back to one of the two main parties in order to stop the other getting in.  Anyone who thinks the Brexit Party would be elected into government, or the Lib Dems for that matter, has not been paying attention to every single general election in their lifetime (and longer).  Folks, we are in a two-party system and that's not going to change overnight.

Furthermore, a Brexiteer PM could potentially stop the Brexit Party dead in its tracks.  Look what happened to UKIP after we voted to Leave the EU.  Voters deemed them irrelevant once the referendum was won and they were obliterated in the 2017 general election.  If we actually left the EU on October 31 (don't hold your breath) then Nigel Farage can retire once and for all.  Game over.

However, we have been here before.  We were told that March 29 would be the date, over and over and over again.  April 12 then passed us by.  Halloween is a long way off, plenty of time for devious MPs like Yvette Cooper and Oliver Letwin to stop us from leaving again.  Therefore it is imperative that the Brexit Party ball keeps rolling in the meantime.

Peterborough has flip-flopped between the Tories and Labour for decades, no other party has come close.  Make no mistake, a victory in the by-election this Thursday would put the European elections in the shade.  It would not only parachute the Brexit Party into the Commons, it would show that they have some impetus beyond Brussels.

While the longevity of the Brexit Party is linked to a Tory Brexiteer leading us out of the European Union, if he/she fails in October and Labour MPs are seen as the main obstacle then the success story will continue, particularly in the north of England, Midlands and Wales.  Many northern Labour MPs are petrified of the current course that Labour is set on.  They have watched nervously as Labour councillors and MEPs have gone to the sword in the last month, particularly in areas where the MP has done everything they can to stop Brexit from happening.  Lisa Nandy (Wigan), Melanie Onn (Grimsby), Ruth Smeeth (Stoke-on-Trent North), Ian Lavery (Wansbeck) and Stephanie Peacock (Barnsley East) are all resisting moves by what is now seen as a London-centric party towards a second referendum and Remain.  Not surprisingly, they want to keep their seats. 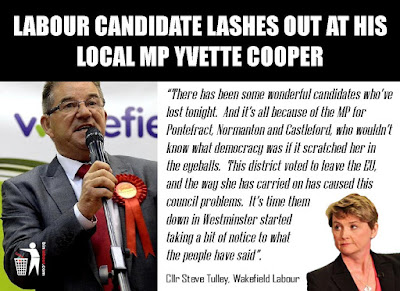 Even the likes of Little Owen, who has done his best fence-sitting impression of the Great Leader where Brexit is concerned, now says that Labour should officially back Remain (or revoke, to use a better word).  This is music to the ears of Nigel Farage.  The more enthusiastically that Labour embraces a hard Remain stance the quicker it will commit suicide in the Brexit heartlands.  If we do not Leave the EU in October and a general election follows, many Labour MPs will come under serious threat from the Brexit Party.  Looking further ahead to elections in 2021 Labour could lose its grip on the Welsh Assembly for the first time ever.  The current administration in Cardiff has already set out a hard Remain strategy, completely at odds with both the 2016 referendum result and also the thumping victory for the Brexit Party last week.  Labour finished third for the first time ever in a Welsh election, a shocking result that was mirrored across England, with the exception of what John Cleese might call the 'not so English' capital.  If the national party decisively sets out a Remain course it will be seen as a London-centric direction and the outrage will be immense.

In some circles it is already being felt.

On the night of the European elections the Labour MP for Wigan was seething about the narrative that was being played out on the BBC, Twitter and within her own party.  Lisa Nandy bemoaned that the Islington result appeared to be the only local result that mattered, that London was the only region that mattered and despairingly tweeted her own local result to point out that the Brexit Party was obliterating Labour in the north.  While all this was going on the BBC had Emily Thornberry on, waffling angrily about Labour not being Remain enough, Thornberry being a member of the north London clique that dominates Labour's front bench.  No wonder Nandy was peeved.

While the Tories have a more simple agenda to achieve their salvation - deliver Brexit - Labour are stuck between the Devil and the deep blue sea.  Corbyn understandably tried to be all things to all people, both Leavers and Remainers, but he failed miserably.  His last ditch attempt to hold back Farage was to use insults that not only didn't wash, but also served to insult traditional Labour voters who backed Leave in 2016.  Corbyn doesn't have any answers, neither does his party.  It is now hopelessly split more so than the Conservatives ever were.

We may yet see that Labour/SNP coalition disaster, but there are now so many more variables bobbing about in the political swamp that it is no longer inevitable.  If the Brexit Party can pull it off in Peterborough on Thursday this will be another hammer blow to Labour and demoralise them even further.  A perfect storm is required for it to happen - a) voter turnout b) massive swing from both Tories and Labour and c) Labour haemorrhaging votes to hard Remain parties.

I started this article by quoting Little Owen.  I'll end by quoting him again to show that Labour really are clueless, desperate and in trouble.

"Another shake-up is surely overdue, too, and that is around the shadow cabinet table.  Corbyn surely needs more big hitters who can refocus the national debate on Labour’s currently marginalised priorities.  The first suggestion is Ed Miliband".
Owen Jones

If Labour's saviour is Ed Miliband, the man who ensured the first Conservative majority in 23 years, then Labour are f...
at May 31, 2019