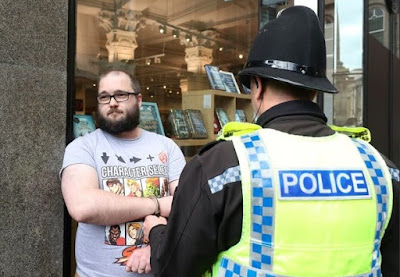 "Mr Paul Crowther emerged from his parents' basement for the first time in a decade and..."
@conorh_96

That's how one Twitter user referenced the latest 'milkshaking' incident.  After other pro-Leave candidates have been persistently dowsed in recent weeks, it was almost inevitable that Nigel Farage would fall victim at some point.  Today was his turn.

The perpetrator has been named as 32-year-old Paul Crowther, a Labour supporter and Remainer from Throckley in Newcastle-upon-Tyne.  Crowther even posted on his Facebook page beforehand to announce his intention.  That won't do him any favours if he goes to court (big 'if', that).  Might want to do something about your privacy settings lad. 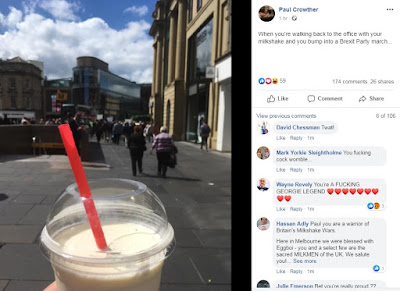 As the tweet at the top of this article suggests, Crowther appears to be a total geek.  Not only does he feature Doctor Who, Game of Thrones and Harry Potter among his profile pictures, he was arrested wearing a superhero t-shirt.  He claims to be a customer service rep at Sky and lists the Labour party among his Facebook likes.  He also indicated his Labour support with the following profile picture, featuring a cartoon rendering of his family. 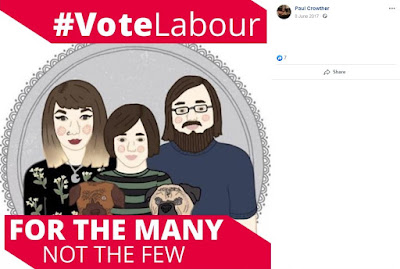 Labour has ramping up its rhetoric against the Brexit Party over the last two weeks or so, increasingly labelling them 'far right' and 'fascists'.  These tags are clearly outrageous slurs to anyone with a level head, but to simple minded remoaners still spitting bile over the 2016 result it can be an incitement to take direct action.  Labour MPs, activists and Remainers have normalised this kind of behaviour to the extent that an American fast food chain had the temerity to join in with this outlandish tweet.

Going through our Twitter feed we can see no messages of sympathy from the same people who cried foul when Corbyn was egged earlier this year.  That culprit received 28 days in the slammer for that incident, whereas some of these 'milkshakers' have not even been arrested.  On Friday the constituency office of a Labour MP was daubed with the word "TRAITOR".  Labour colleagues and fellow Remainers flocked to show their support for Chris Bryant.  If they were absolutely genuine about stopping this kind of behaviour then the same people would condemn these milkshake attacks.
at May 20, 2019