Julie Ward is one of Labour's three MEPs for the North West of England.  She is the epitome of an upper middle class establishment politician, her previous job was in 'the arts' and she has a degree in 'education and international development'.  Groan.  Still, it didn't stop her from issuing this vaguely racist and hugely hypocritical tweet yesterday. 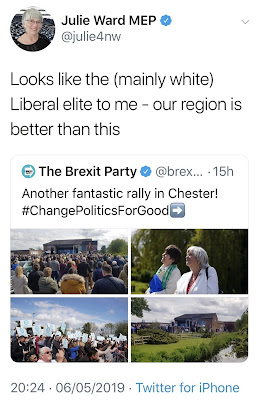 It's not often that arrogant establishment politicians like Julie rein in their bullshit, but you'll not find the above tweet any more as she has deleted it.  Now there's an admittance that someone did something wrong - fucked up there didn't you Julie?

Ward is clearly panicked about the rise of the Brexit Party and as the number two on Labour's list her seat and place at the trough is potentially under threat.  She has previously pleaded with Corbyn to back a second referendum and help secure her job in Brussels.  Here's hoping she is kicked off the gravy train in three weeks. 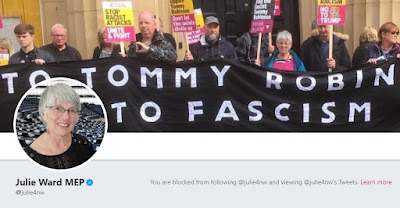