The graph that Mahyar alluded to in his video can be found below.  As you can see, 'Change UK' spent more than £200,000 on Facebook ads in the four weeks prior to the election.  A lot of money for a party that not only failed to win a seat, but did so badly that it polled less votes than the SNP, a party that only stood in one region.  Conversely, the Brexit Party spent less than half that amount and won the election (sorry, remoaners, but they did).  Poor Chuka and co.  Rest in peace 'Change UK'. 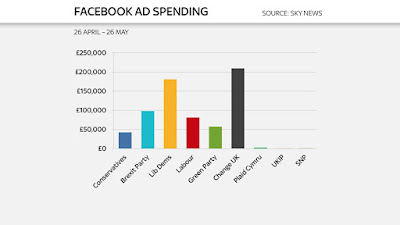