The Provisional IRA murdered a policeman in a rocket attack in west Belfast.  Constable Samuel Vallely was travelling in an armoured Land Rover along with four colleagues, through the Catholic New Barnsley district, when a rocket-propelled grenade struck the vehicle.  The shoulder-launched Soviet-made RPG-7 was launched after the Land Rover was lit up by a petrol bomb.  The RPG hit the side of the vehicle and blew off the roof, but the driver managed to continue and get his injured colleagues to the Royal Victoria Hospital.  PC Vallely died a short time later.  He was the first police officer to be killed by the IRA in a rocket attack on a police vehicle.

23-year-old Constable Vallely was married, with a 16-month-old daughter.  The family home was in Carnmoney on the outskirts of north Belfast.  At the time of his death, Mrs Vallely was pregnant with their second child and gave birth to a boy later that year.  The couple had been planning to emigrate to Canada.

A 37-year-old local man was later charged with the murder of Constable Vallely. 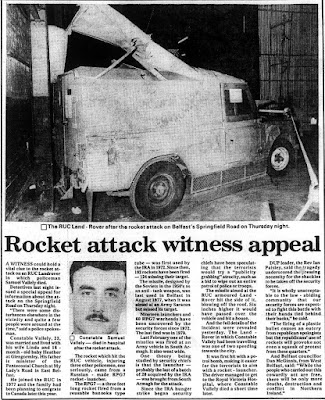