Raheem Kassam has been banned from posting on Facebook for seven days.  This is the third time he's been banned in three months. 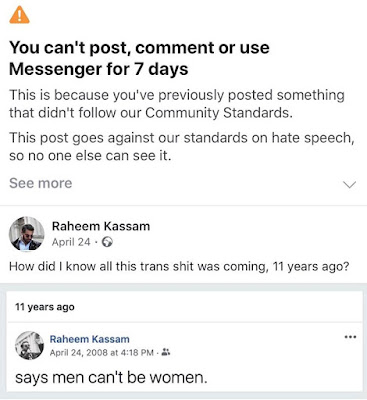 His 'error' this time was in making a reference to a post he made ELEVEN years ago.  You simply can't use science against the trans community, apparently.  As we ourselves are fully aware, using facts is no defence where the Facebook fascists are concerned.  Persistent censorship of our page over the last four years has already changed how we behave.  We used to post regularly about Muslim grooming gangs, but then we started getting banned merely for using the word 'Muslim' in relation to the gangs.  So now we rarely post about grooming gangs and when we do we can no longer refer to the most glaring aspect.  It's a sad state, but the left are in complete control of the platform.

Raheem Kassam knows what is coming, as do we.  So many right wingers have been airbrushed from social media this year that it's only a matter of time before they come for us.  This is one of the reasons he's now set up his own news website - Human Events.  Likewise, we set up this blog.  We also plan to set up accounts on other social media outlets in preparation.  Will keep you posted.  Please also be sure to follow us on YouTube.

Raheem has been inexplicably restored to Facebook, so for all intents and purposes he appears to have been barred from the site purely for election day.  Funny that.
at May 24, 2019