Rhondda MP Chris Bryant awoke this morning to news that his constituency office had been spray painted with the word "TRAITOR".  Bryant, also known by his nickname 'Captain Underpants', took to Twitter to break the news. 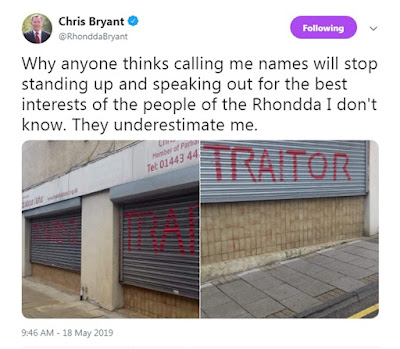 Bryant told the Independent:  "We didn’t used to be a country like this – we used to be a country that respected political differences, but somehow or other we’ve lost that".  It's quite obvious how and when we lost it Chris.  We lost it when MPs like you turned your backs on the people, and in your case the 60% of your own voters who chose to Leave the European Union.

Naturally, Remainers rallied round poor Chris, and not just from his own party.  Leanne Wood of Plaid, and Chuka, both tweeted their support.  Of course they did, because their parties espouse complete revocation of Article 50, something that Captain Underpants is also very keen on.  In 2017 he defied Labour whips to vote against triggering Article 50 and has persistently voted to frustrate Brexit ever since.

He later tweeted with the hashtag #ThisIsNotTheRhondda.  Sorry Chris, but it is the Rhondda, and people are understandably furious about your treachery.
at May 18, 2019