This very intriguing map produced by Election Maps UK is based on current opinion polling.  If this proves to be near the mark, these elections are going to send a shockwave through to the establishment, both here and in Europe. 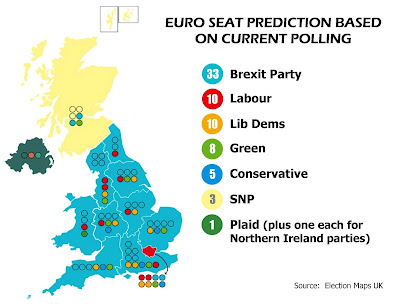 The map shows that the Brexit Party are favourites to win in nine of the eleven regions it is contesting (no Brexit Party in Northern Ireland).  The South West England prediction is worth noting, this is where loony Lord Adonis is desperately trying to get himself elected as a second Labour MEP (there is currently one Labour MEP).  The graph suggests he would not only fail, but Labour would also lose its existing seat!  No seat for Labour in Scotland would also be a smack in the mouth for Corbyn.

Although UKIP won the 2014 contest, it was a close fought victory with UKIP on 24 seats, Labour on 20 and the Tories on 19.  This graph suggests the Brexit Party could receive more than three times the seats of its nearest rivals.  We say could, because as we know opinion polls have not proven to very reliable in recent years.  The latest YouGov poll shows a further decline for Labour with the Lib Dems now ahead of them by one point.  Similarly, the hard Remain Greens have overtaken the Tories by the same margin.

The outlook for both Change UK and UKIP is grim and neither is likely to pick up a single seat.  Much of the support for Chuka and co appears to have shifted to the Lib Dems and Greens.  Having shirked the electorate on numerous occasions, this was to be their big test.  If they fall here there will be 11 MPs wondering how they could have got it so wrong.  Funny.

The full breakdown of the predictions detailed in the above map is as follows.

There was no key for Northern Ireland, but there would be one seat each for the DUP and Sinn Fein, presumably the third seat would go to either the Ulster Unionists or SDLP.
at May 17, 2019