Ruth Townsley has been sacked by the charity that employed her.  Happy City UK had been inundated with complaints about her vile tweet.  It wasn't an isolated incident as we uncovered an earlier social media post she had made in 2017 calling for rich people to be murdered.

Happy City posted two updates on its Facebook page today.  The first was posted mid-morning and said Townsley was being investigated.  The second was posted this evening and she was gone. 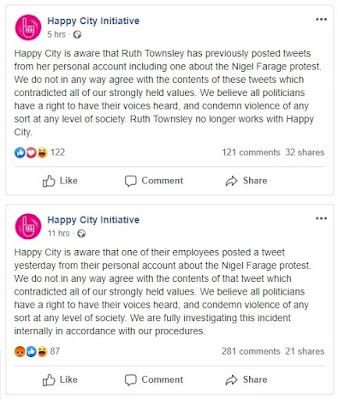 It's about time that someone actually paid a price for their despicable actions during this most vitriolic of elections.  Now that a 'milkshaker' has finally been arrested and charged, and someone has lost their job on the back of inciting GBH, perhaps people will step back and think before they act.
at May 21, 2019