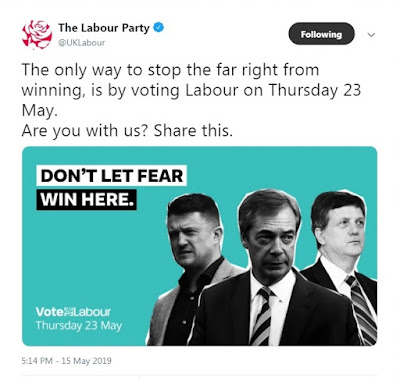 You know Labour is desperate when they start banding around ridiculous terms as 'far right' and 'fascist' to describe their opponents.  This is now the party line and is being repeated up and down the country in a pathetic attempt to shore up their disintegrating vote.  The lead candidate in Wales urged voters to stop the 'far right' by voting Labour.  She doesn't name them, but she is clearly not referring to the Tories, Greens, Lib Dems or Plaid.

Labour aren't actually that worried about Tommy Robinson.  He's standing as an independent in one region and is actually a benefit to them because he is watering down the Leave vote.  However, they use his image to tar the others with the same brush.  A significant chunk of the Brexit Party is actually made up of Kippers who quit UKIP for the precise reason of Tommy Robinson.  All recent polling suggests there is only one real threat to Labour in these elections and that is why Farage is front and centre in their Twitter graphic and the background colour is not the purple of UKIP, but the sky blue of the Brexit Party.

With one week to go, expect more of this playground stuff from Labour and a tidal wave of media smears to boot.
at May 16, 2019