HOLD YOUR NOSES FOR BREXIT 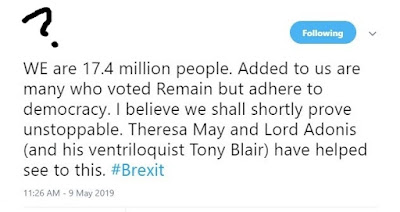 Without the prejudice of knowing who wrote the above tweet, any Brexiteer can surely agree with every sentiment therein.  It doesn't matter whether you are left or right - it's stirring stuff.

Until Brexit is delivered - in full - many of us will have to hold our noses and unite with those whom we would normally be opposed to.  After-all, surely the most important goal of our time is the implementation of the Leave mandate, not the pursuit of petty squabbles among ourselves.  To vote one way or another because of 'personalities' or past actions is a bizarre way to go, unless of course you don't really care about Brexit.

One of the finest pro-Brexit voices on the internet right now is actually an outright leftie.  He's the kind of anti-Semitic far left scumbag we would normally be tearing into, but now is not the time.  Who wrote that tweet... 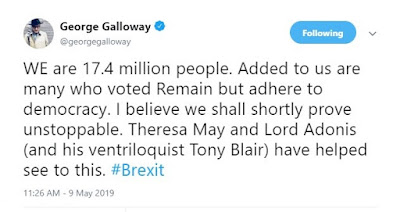 Galloway has put his differences aside in order to back a Leave party at the forthcoming elections.  By his own admission he would not normally find much common ground with the likes of Nigel Farage, but in order to achieve his Brexit dream he is prepared to hold his nose.  Predictably, Remain-supporting leftists have demonised him as an 'extremist', the same people who would have been applauding him enthusiastically in the past.  We now have a chance to get one over on these Remain bigots.  They are hopelessly divided right now and could not even come to an arrangement for the Peterborough by-election.

At the forthcoming Euro elections there are three hard Remain parties standing across the mainland, plus the SNP in Scotland and Plaid in Wales.  They are all desperately vying for scraps from the Labour plate and they will get plenty for sure, hopefully ensuring that Labour is pushed into second place and defeated.  Everyone has their part to play.

The 17.4million are not all like you or I.  Remainers may have convinced themselves that Brexiteers can be pigeonholed as elderly white right-wing xenophobes, but we all know that is bullshit.  Brexiteers come in all sizes, shapes, colours, ages and political affiliations.  George Galloway is testament to the latter.

United we stand, divided we fall.  Sounds corny, but it has never been more accurate.
at May 12, 2019