Several Change UK MPs have tweeted some outlandish smears this week regarding pro-Brexit parties.  In fact they are nothing short of bare-faced lies...

Here Chris Leslie signals his 'solidarity' with Jess Phillips who has recently been the focus of some unpleasant remarks by UKIP candidate Carl Benjamin.  Except here there is no mention of UKIP and he suggests that the Brexit Party is responsible.  Desperately and deliberately misleading. 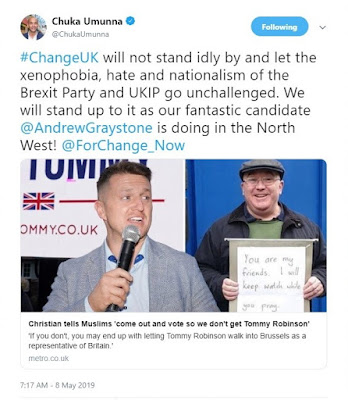 Here Chuka is spouting off about both UKIP and the Brexit Party, but he attaches an article about Tommy Robinson.  Robinson is not standing for either party and is an independent.  Again, desperately and deliberately misleading.

Conversely, Change UK's Gavin Esler appeared on Politics Live today and started ranting about people telling lies!  A bit rich Gavin.  In this rather lively spat with Martin Daubney of the Brexit Party, Esler would not let his opponent get a word in and changes the subject when Daubney brings up the smears.  "Change"?  Your party is just more of the same! 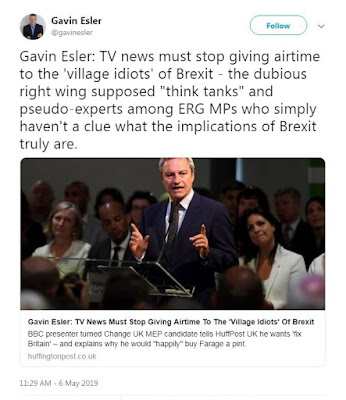