The Provisional IRA murdered a British soldier outside an army recruitment office in Wembley, north-west London.  At around 17:15 Sergeant Charles Chapman went outside with a colleague to move a van that was parked in the service road behind the office.  As he did so a bomb exploded underneath the vehicle, killing him and injuring four others.  Sgt Chapman's colleague received injuries to his legs, shoulder and face.  Although the pair had checked underneath the vehicle, the Semtex device was well hidden and exploded as the ignition was turned on.

Sgt Chapman, 34, was a member of 3rd Battalion the Queen's Regiment and based at Inglis barracks in north London.  'Chad', as he was known, was originally from County Durham and had joined the army in 1972.  He became a recruitment sergeant following a two-year tour of duty in Northern Ireland.  He was married with two children and was buried following a packed funeral in Newton Aycliffe, attended by hundreds of mourners.


"He was a first class NCO, highly regarded by everybody and extremely popular with the soldiers under his command.  He was a true professional".
Sgt Chapman's commanding officer 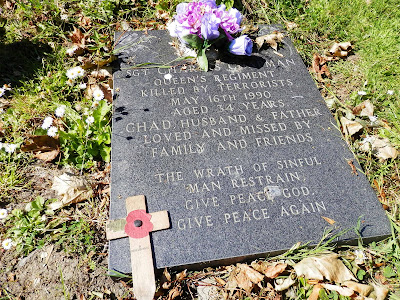 No-one was ever convicted of Sgt Chapman's murder.  Conservative MP Ian Gow raised the bombing in the Commons the following day and asked the PM if she was confident those responsible could be extradited from the Irish Republic.  Two months later Gow was himself killed by an IRA bomb.
at May 16, 2019