ADONIS PREACHES TO THE NORTH

Despite failing to get elected to his beloved European Parliament, Lord Adonis was back on the remoan trail big time today.  He did a media circuit that included Sky, Bloomberg and LBC, where he faced a rather exasperated Nick Ferrari.  On Sky he was asked about Wigan MP Lisa Nandy's opposition to a second referendum, to which he basically replied that northerners should be bribed into submission and told that the Leave mandate should be ignored (see video below).

Capital-dwelling Remainers like Adonis have still not learned from the mistakes of 2016 and they cannot see that for Labour to lurch towards hard Remain could mark the beginning of the end for Labour not only in the north, but also the Midlands and Wales too.  As Lisa Nandy tweeted despairingly on election night, Britain does not cease to exist beyond the M25. 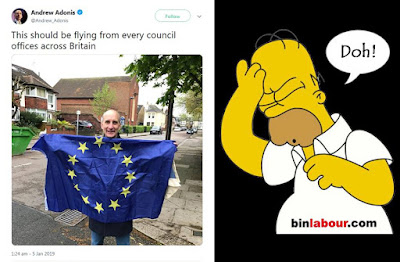