The Provisional IRA murdered two policemen and an army officer in a bomb attack in south Armagh.  An eight-man joint police/army foot patrol were moving through countryside near the notorious republican stronghold of Crossmaglen.  As they were crossing a ditch the terrorists detonated the bomb by remote control, killing the two RUC officers instantly.  The army officer, a major, died later at Newry's Daisy Hill Hospital.  The five other members of the patrol escaped uninjured.

The terrorists were thought to have been hiding on a hill overlooking the site and had triggered the bomb before fleeing.  The casualties were ferried away by army helicopters, while security forces on the ground struggled to secure the area fearing a second device.

The murdered policemen came from both communities.  Constable David McBride was a 27-year-old Protestant from Enniskillen.  His brother-in-law had also been a policeman and had been killed in a similar IRA bombing two years earlier.  Constable William Smyth was a 25-year-old Catholic from the village of Cloughy in County Down.  He had been a talented Gaelic footballer, but was not allowed to play professionally because the Gaelic Athletic Association forbade members of the security forces.  In the event of his death he had instructed that his possessions be donated to the cause of Mother Teresa.

Major Andrew French MBE was one of the most senior army officers to be killed during the course of the Troubles.  Major French was the commanding officer of 2nd Battalion the Royal Anglian Regiment.  The 35-year-old came from Millswood in Suffolk and was laid to rest in his home county. 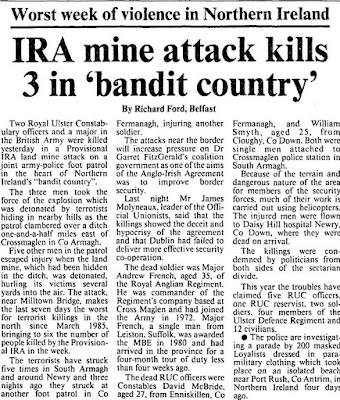