Outrage over the government's point-based immigration system is not limited to Labour politicians.  Both the Lib Dems and SNP have both condemned the move, but it was the reaction of one former Lib Dem MEP that drew the attention of many Twitter users. 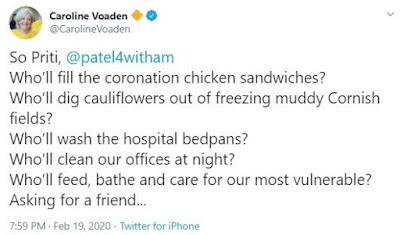 The sneering attitude and lack of self awareness is astonishing.  It seems that in Caroline Voaden's mind this is all that foreigners are good for, a point so succinctly put by whoever is running the @labourleave account these days. 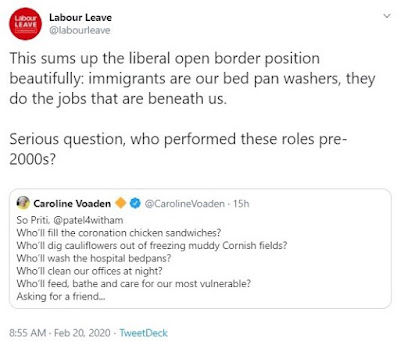 Brendan Chilton, a Labour councillor and prominent Brexiteer is possibly the man behind the Labour Leave account.  He tweeted his own response to Voaden, as did comedian Geoff Norcott. 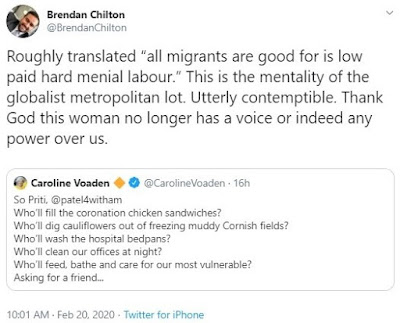 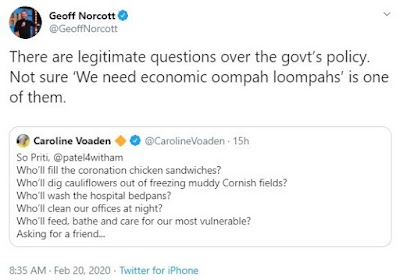 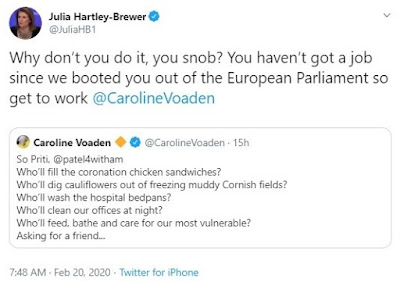 Caroline Voaden is a former Reuters journalist and EU fanatic who joined the Lib Dems the day after the EU referendum.  She considers herself European rather than British, the country of her birth.  And yet Voaden resides in lush rural south Devon, far from the urban landscapes most affected by mass immigration.  South Devon's demography is 94 per cent white British.  Funny that.

Voaden was elected to the European Parliament last May and briefly led the Lib Dems in Brussels from November up to Britain's departure last month.  As she did not serve a full year as an MEP she will not be entitled to draw an EU pension when she turns 63.  Such a shame.
at February 20, 2020