Leftist race-baiter Lee Jasper had his Twitter account suspended last week.  The ban followed one of his most sickening tweets yet (see below). 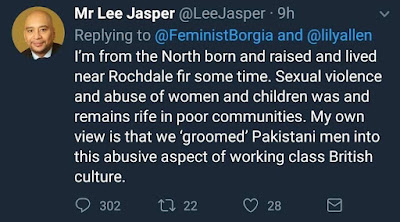 It's not known if the above tweet prompted Twitter to act, but it understandably created uproar and disgust.  Jasper is well known for his provocative rhetoric and anti-white outbursts.

Despite being of mixed race heritage, he is obsessed with scapegoating what he sees as a racist white establishment for every single ill suffered by the black community.  While bemoaning the lack of diversity he paradoxically deems black people who work for or with said establishment as not "real black people".  He has also been particularly scathing about the police and in 2018 was accused of inciting violence against them with a tweet directed at white "undercover racist cops".  In the same year he referred to a Labour LGBT group as a "gay KKK night out" - because all the people in the photo were white.  A year earlier he told a Twitter user that "we're colonising Europe... you [white] man can't breed. We can".  In 2015 he told another Twitter user that "we don't hunt in packs like white boys" while a contradictory tweet declared that "the white man is the most violent ethnicity in world history".  He has also announced on several occasions his belief that "white boys have a thing about black men's tackle".  In 2011 he compared the then London mayor Boris Johnson to Norwegian far right terrorist Anders Breivik.

Jasper's persistent victim mentality led him to conveniently declare in 2012 that "black people can't be racist".  Bear in mind what you have just seen and read above.

So who is Lee Jasper anyway?  Well, he was a senior policy advisor to Ken Livingstone during his second term as mayor of London, specialising in policing, equalities and race relations - once again bear in mind what you have just seen and read above!  He resigned in 2008 following allegations of corruption.  He later turned up as a candidate for the hard left Respect Party, but rejoined Labour in 2018 after an earlier application was rejected.  He was allowed to rejoin after an NEC ruling chaired by Andy Kerr, a Corbyn loyalist.

With members like Lee Jasper, no wonder Labour is currently being investigated by the Equality and Human Rights Commission.  If he's allowed to retain his membership by the next administration it's a damning indictment on them and the party itself.