THE CLOUD CUCKOO LAND OF 'REJOIN'

There are thousands of posts on our Facebook page and each day thousands of new comments appear.  Keeping tabs can become a bit of a blur, but occasionally the eye is drawn to something that stands out.  It was the following comment on a Labour leadership meme that caught our eye over the weekend.

We'll gloss over the misspelled 'Kier', it's the naivety and ill-informed reference to rejoining the EU that made many people click the laugh out loud emoji.  No country, even with Keir Starmer at the helm, can instantaneously join (or rejoin) the EU.  The UK did not join the EC until 1973, ten years after it first applied for membership.  Some of the former Yugoslav republics have been waiting for years - Macedonia applied to join in 2004, Montenegro applied in 2008 and Serbia applied in 2009.  They're still waiting.  The last former Yugoslav republic to have its application accepted was Croatia, after a ten year wait.  Another applicant - Iceland - applied in 2009, but gave up four years later and suspended negotiations indefinitely.  An independent Scotland would have to jump through the same hoops, contrary to SNP claims.

So, what have we learnt from the Facebook comment?  It provides further evidence that despite appointing themselves the superior intellect in the Brexit debate, Remainers have plenty of idiots in their ranks.  The Centre for European Academic Research is actually a Facebook page.  Established in October 2018 it has just over a thousand followers.  The page displays such fanatical devotion to a federal Europe that it's as if Guy Verhoftwat himself is writing it.  This was one of their most recent posts. 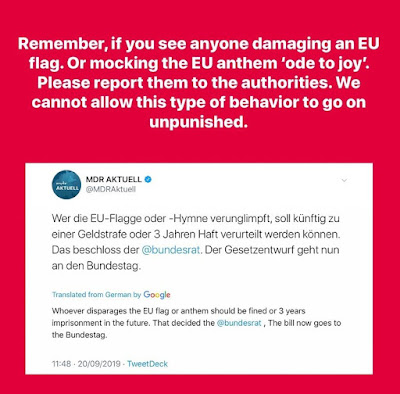 The post refers to proposed legislation in the German state of Saxony, but the author here appears to suggest that it is already law throughout the continent!  Another post suggests that the controversial membership fee to vote in the Labour leadership election should be increased "in order to keep the little Englanders out".  If this is the calibre of support that Sir Keir Starmer has behind him then perhaps he will be about as 'effective' as Wrong-Daily.
at February 17, 2020