RAYNER IN THE SECOND?

In addition to its leadership poll YouGov also conducted a poll for the deputy leadership.  Rather unsurprisingly Angela Rayner was miles in front, but unlike Starmer they don't expect her to win outright.  They predict a narrow victory in the second round, after Ian Murray is eliminated in round one.  Hard left candidate Richard Burgon is expected to come a distant second.  Presumably he'll claim that it was a victory and his policies were 'popular'! 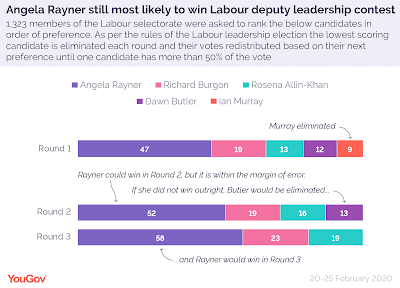