Newly elected MP Zarah Sultana is keen to make a name for herself.  The hard left Corbynista made a splash with her maiden speech last month and has been on the campaign trail with continuity Corbyn candidates Long-Bailey and Burgon.  She is also speaking at next week's 'Rally for Socialism'.  Last night she was with her idol and mentor, proudly tweeting a picture of her giving a speech to his local constituency party (that has just backed Keir Starmer for the leadership, titter).

Sultana also spends a lot of time sniping at Tories and Zionists on Twitter.  She's had to delete a lot of old tweets since her election, but we can still marvel at the gifts she provides on a daily basis, like the one below. 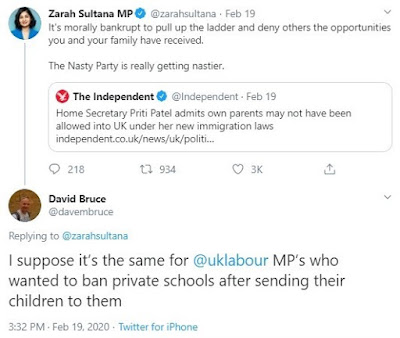